7 Things I Learned From Pierre Roy

7 Things I Learned From Pierre Roy 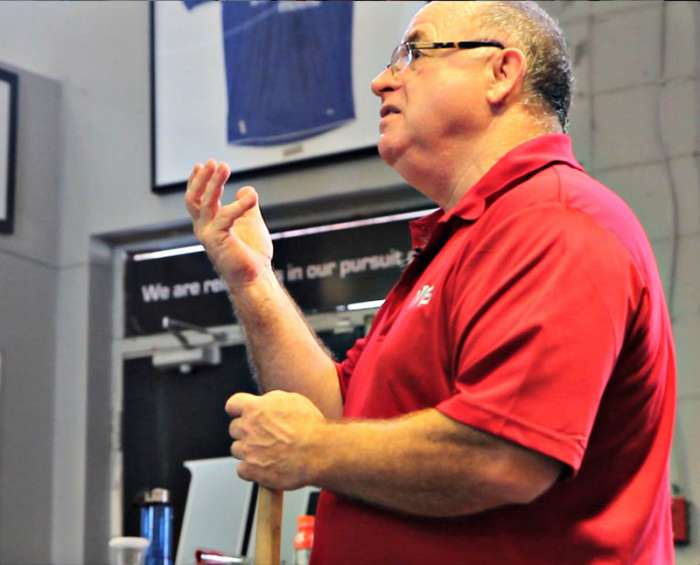 A little bit about Pierre Roy:

1. Most difficult place for the bar to pass is the knees 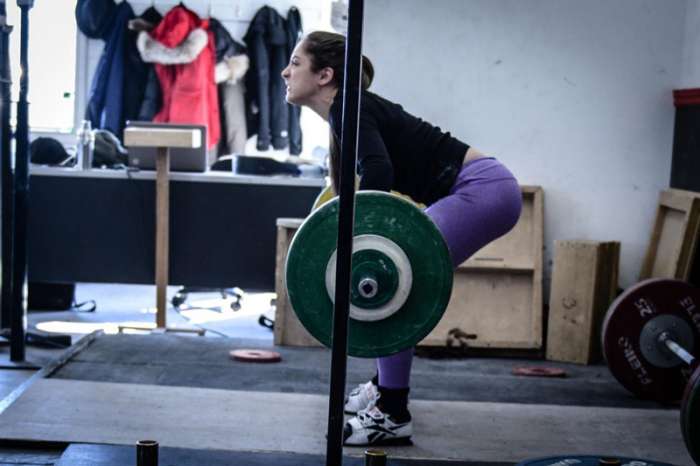 In both the snatch and clean & jerk most athletes and lifters have trouble passing the knees while keeping the shin angle perfectly straight at 90 degrees.

Maintaining the shins at this angle is important because it helps you to stay over the bar, which maximally stretches the hamstrings.

The longer you can stay over the bar the more of a elastic effect you will get from the hamstrings to snap yourself under the bar for a snatch or clean & jerk.

The more you learn to use your hamstrings, the better transfer lifting will have to sport.

There are usually three reasons why an athlete can’t stay over the bar – weak hamstrings, tight hamstrings, or a weak back.

So if your athlete is having trouble staying over the bar address these areas with accessory work such as stretching, RDLs, Good Mornings, and back extensions for starters.

2. Bar must be integrated into the hips 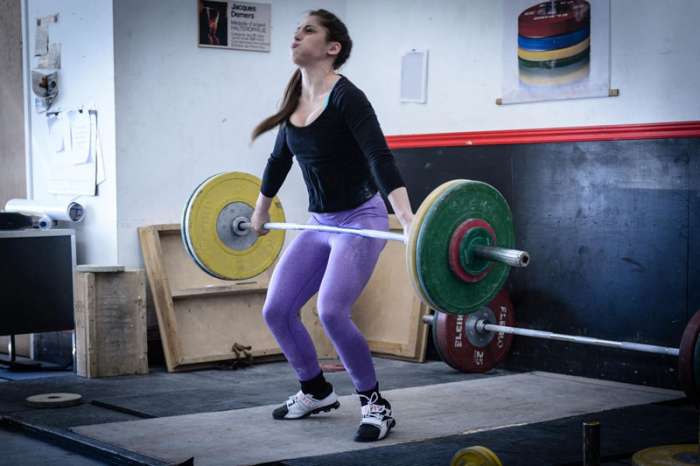 This is extremely important and I personally feel it is one of the most difficult and overlooked technical elements in coaching Weightlifters.

This is the explosion part, the part where the athlete maximally uses the hips and legs to throw the bar vertically overhead.

One of Pierre’s athletes, Marie Julie, is an excellent example of how to do this properly. She is a former Canadian Junior record holder in the 58kg class with a 84 kg snatch. The first time I saw this incredible explosion was when I hosted a seminar at my gym and Marie was demonstrating for us.

It was like now you see the bar and now you don’t! She became one with the bar and then WHAM! The bar disappeared into her hip crease and you could see the bar bending as she used the tremendous power of her hips and legs to launch that bar vertically.

As Pierre would say, your arms cannot compare to the power and strength of your hips and legs.

To achieve this type of power you MUST keep the bar very close to you and stay over the bar as long as possible and push the floor away!

3. There is no correlation to the drop snatch and snatch 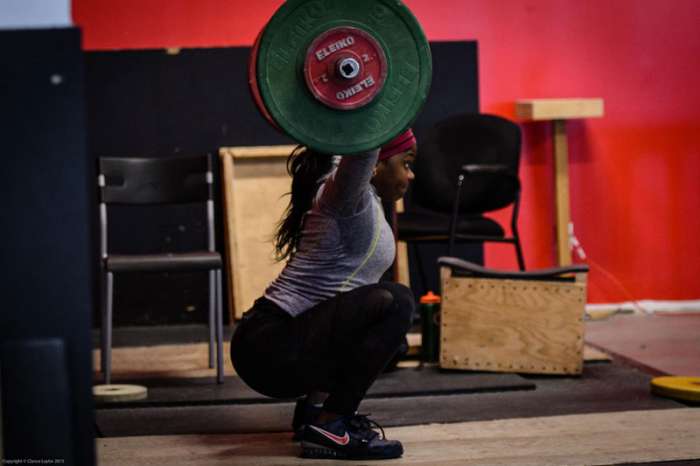 Strength is specific! Pierre believes drop snatches are a waste of time and if done too much are the cause of wrist problems.

If you really take a look at how many athletes and lifters do the drop snatch, they actually catch the bar at the top and ride it down.

That is NOT a snatch and does not correlate to the specific movement of the snatch. During the snatch you have to jump under the bar and catch the bar in a lower position, the lower the better. The snatch is about coordination and timing, and snatching at 70% and doing drop snatches at 100% or 110% is totally different.

Snatch the bar overhead and hold for a count of three. I do use this with my lifters and athletes and we do virtually no drop snatches, as this method works far better.

The problem is making sure the lifters actually do them, as the exercise is extremely taxing and they hate it. 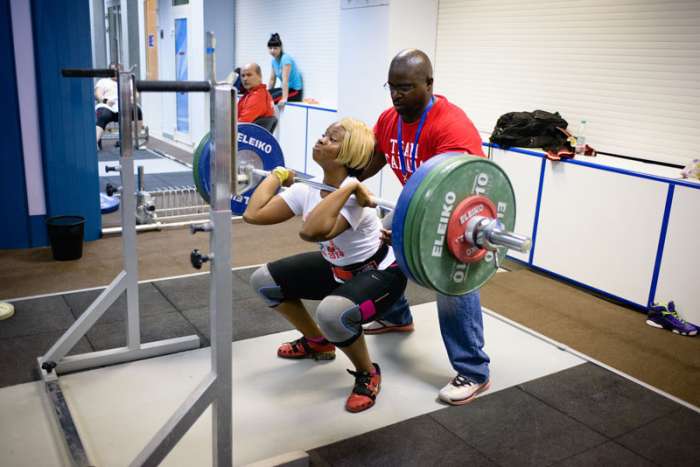 It is a major mistake to build strength on poor technique.

Bad habits will be hard if not impossible to break! I had a lifter who could not snatch or clean but could power snatch and power clean.

This made no sense because she was mobile, flexible, and strong.

She was strong on horrible technique so what I did was any time she did a power snatch or power clean when she was not supposed to do so she had to go back down in weight.

I programmed no power snatches or cleans, just a steady diet of full snatches and full cleans. She ended up snatching 65 kg and clean & jerking 80kg. She was well on her way to a 180 kg total and would have surprised many people that year but she ended up having a baby instead.

So onto more important things than weightlifting. 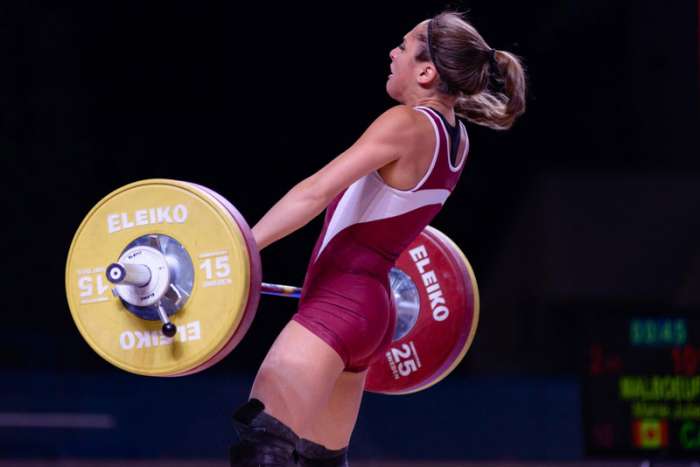 This is why I love weightlifting for athletes! A lot of uneducated coaches try to diminish the transfer weightlifting has to sport and that is a huge mistake.

They just don’t know how to TEACH it and are too lazy to learn!

The athlete who can PROPERLY use their legs will generate more power, force, and acceleration than the athlete who is depending on their upper-body or arms, and there is simply no question about this.

It’s a fact that force is generated from the ground up.

This is one of the reasons athletes jump farther, run faster, and are super explosive! All of my athletes include weightlifting in their training three to four times per week.

What I am doing is teaching the athlete to how use their legs. I don’t want to turn hockey players, football players, or a baseball players into Weightlifters, I just want them to learn to use their legs effectively!

This will have tremendous transfer to throwing, hitting, and sprinting, just to mention a few qualities that are enhanced.

6. The best athletes have strong legs, big butts, and strong lower back 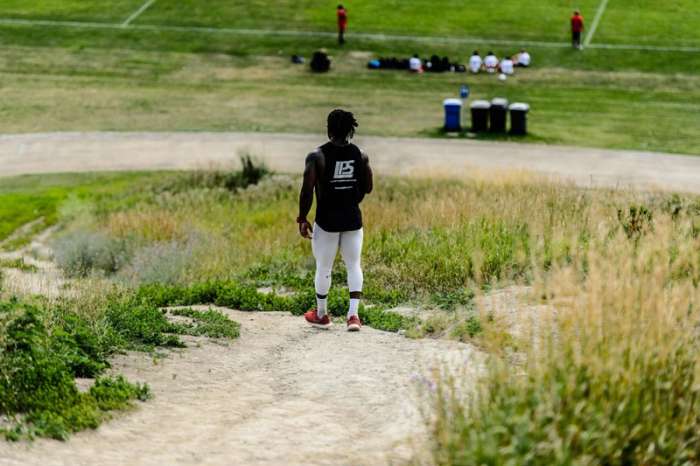 Another main consideration reason for prioritizing lower-body development (relatively speaking) is that if you bulk up the upper body too much you risk distorting the athlete’s skill and coordination.

You don’t want a bulked up, tight, and an immobile athlete. However, that’s exactly the effect that a huge number of training programs are having on athletes. Just simply bulking up the the athletes make for great before and after photos and if the scouting report says they need to put on size, then yes, size is great, but you better have the relative strength to match that size.

Strong is strong, big is not strong.

Yes, Mike Tyson has a big upper-body, but did you ever really look at his lower body? He had a big butt and powerful thighs! Relative to his lower body, his upper body was not that big.

He was one of the hardest hitting humans in history in the opinion of most experts, and I agree. 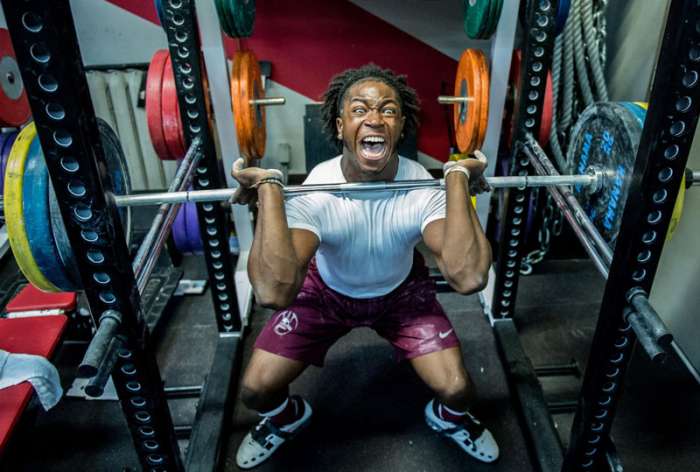 My daughters, Kia and Maya, had a rude awaking during a week’s training camp with Pierre a couple of years ago. It was at this camp that the girls and I were introduced to the true meaning of work capacity and high intensity training.

When I say high intensity I am talking about training in the 80 – 100% bracket, fast and hard!

I noticed Pierre kept telling me and the girls that they must adapt, they will either adapt or die.

And he meant it!

Pierre is a nice friendly old man but he is serious business in the gym! He kept the pressure on the girls and his athletes, to the extent that my girls were having meltdowns. Tears were flowing but he didn’t care, he simply said the girls will cry but if they want to be champions they will be back.

I learned so much from this experience and I realized I was not training my athletes hard enough and not at the appropriate high intensities frequently enough.

After we returned to my gym I kept telling my girls over and over to push the pace, to work faster. I could see the adaptation to such a fast pace of training and high intensities right in front of my eyes.

They were getting extremely fit and strong, and their work capacity at high intensities went through the roof! In the space of three months they turned into machines, you could not keep up with them, the would run you over!

They were completing workouts that usually take one and a half hours in just 45 minutes! Note there were times where they complained that the workouts were just too hard, but I didn’t budge… I just explained what I was trying to achieve and asked them to have faith!

Then WHAM!!! The rest is history and we are still working on more history.

Maya has broken over 17 records in her short career, been too two world championships and finished 5th in Poland at the 2016 World Junior Championships. She now has her sites on the 2020 Olympics in Japan. This is just two of many examples of really taking the adaptation process to another level.

It was Pierre who really taught me and showed me what kind of work capacity is really necessary to achieve world class levels of performance.

He would laugh and say Clance, ADAPT OR DIE 🙂